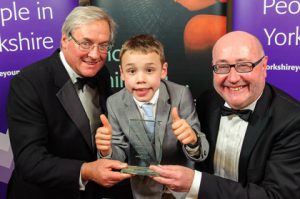 The 2015 Awards, held in November, raised a net profit of more than £46,000, all of which will go to young people and projects supporting them in the region, being distributed through the Yorkshire Young Achievers Foundation. Since the Awards’ inception, a total of more than £1m has been raised.

Foundation Chairman, Peter McCormick OBE, of principal sponsors McCormicks Solicitors of Harrogate, said: “We have been overwhelmed by the generosity of our sponsors, supporters and guests at a time when many in Yorkshire are still finding the economic conditions challenging and I cannot thank them enough for their continuing commitment to helping young people achieve their full potential.”

The Yorkshire Young Achievers Foundation makes grants to a wide variety of initiatives, ranging from sports equipment for promising young athletes to supporting the training of new teachers in Bradford.